How to Remove Door Knob

Do you know how to remove a door knob? It’s actually more straightforward than you might think.
In just a few simple steps, you can be on your way to replacing a door knob so you can install a new one.

Every time you enter or exit a room, your hand comes into contact with a door knob or door handle. Though this may seem like a trivial matter, the hardware on your doors plays an important role in both aesthetics and function. When choosing new hardware for your doors, it is important to consider both style and function. For example, a lever handle may be easier to use if you have limited mobility, while a knob with a decorative backplate can add a touch of elegance to any room. Whatever your style preference, there is sure to be a door knob or door handle that is perfect for you.

A levered door handle uses a lever to create a mechanical advantage, making it easier to open the door. Door handles are available in both Lever and Pull options. The knob is attached to a rod, which is connected to the door latch. When you turn the knob, the rod moves and pushes on the latch, opening the door. Leveraged doorknobs are commonly used on doors that are too heavy to be opened with a standard knob, such as commercial doors or double doors. They are also sometimes used on doors that require an extra-secure closure, such as security doors. So next time you see a levered doorknob, you’ll know how it works!

Door knobs come in a variety of styles and materials, from classic brass to modern glass or functional metal. A cylindrical door knob can turn in either direction but requires you to grip the knob, as opposed to a lever. The knob is attached to a spindle, which is in turn connected to a latch mechanism. When the knob is turned, the spindle turns as well, causing the latch to either engage or disengage. The basic principle behind a door knob is thus relatively simple. 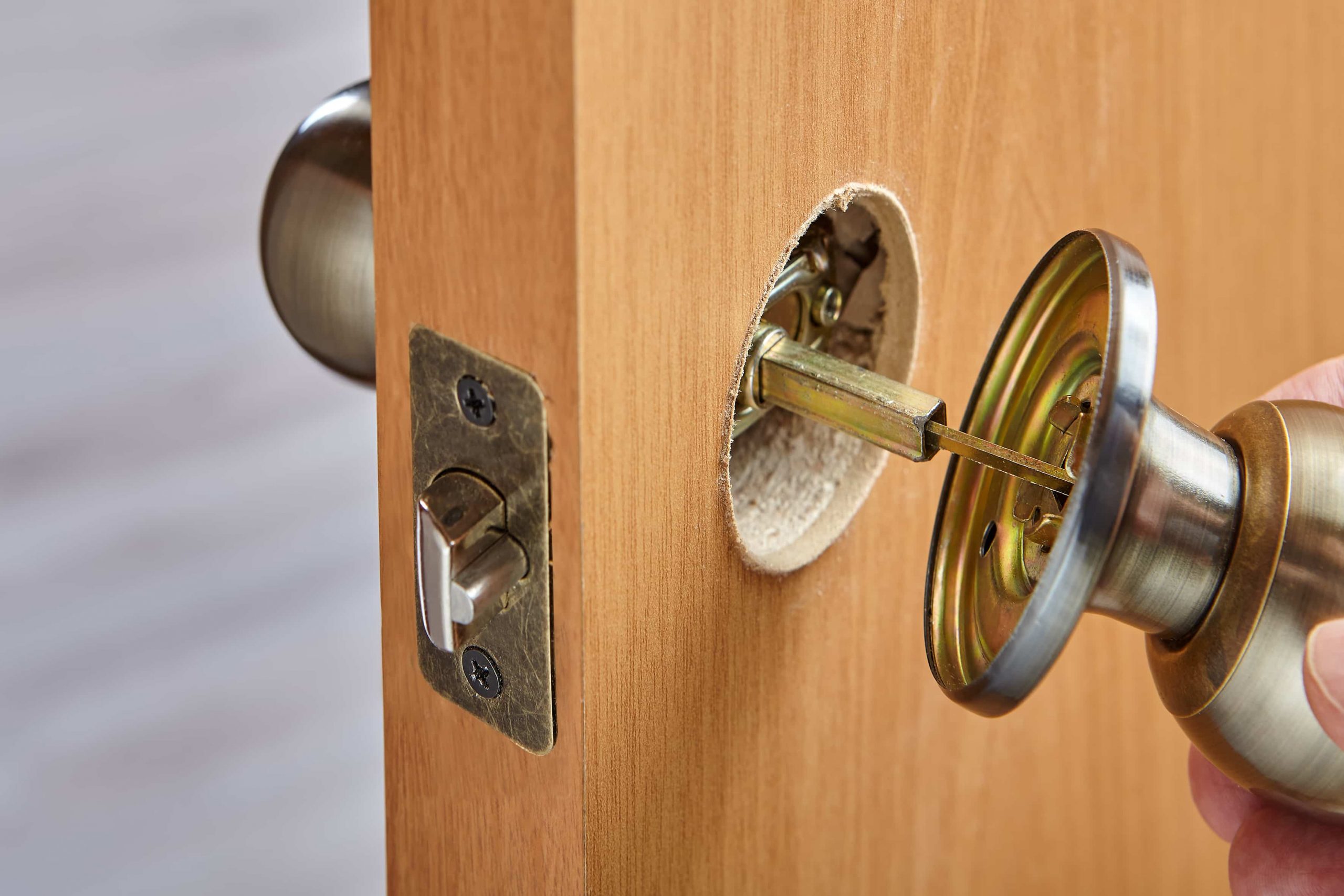 Other types of door locks

Electronic door locks may seem pretty fancy, but the technology behind them is actually quite simple. Most electronic door locks use a system of magnets and sensors to secure the door. The sensors are usually located around the handle and latch of the door. When the door is closed, the sensors create a magnetic field that surrounds the latch. The magnets are then used to lock the door in place. To unlock the door, you simply need to disrupt the magnetic field, usually by entering a code on a keypad or using a proximity card. The sensors will then detect that the magnetic field has been disrupted and will release the latch, allowing you to open the door.

Magnetic door locks are becoming increasingly popular in both commercial and residential settings. Essentially, magnetic door locks work by using two magnets: one mounted on the door frame and the other on the door itself. When the door is closed, the magnets align and create a magnetic field. This field is strong enough to keep the door securely shut, but can be easily released by a solenoid (a coil of wire that becomes magnetized when an electric current is passed through it). This makes magnetic door locks very easy to open with the right access card or key fob, but virtually impossible to break into without the proper entry code. In short, magnetic door locks offer a high level of security with minimal hassle. And that’s why they’re becoming such a popular choice for homes and businesses alike.

How to remove a cylindrical door knob

Cylindrical door knobs are one of the most common types, and they can usually be removed with just a few simple steps.

The first step is to remove the knob. Locate the small slot on the side of the knob’s neck. There will either be a small screw inside or you’ll have to press the button with a straightened paper clip or a thin tool. Repeat with the knob on the other side.

With the covers off you’ll see the mounting screws. Use a Phillips screwdriver to remove these two screws, and the screws in the latch plate. With the strike plate removed and the latch bolt removed, the entire latch assembly can be removed.

How to remove a levered door handle

If you look carefully you should find a tiny hole in the side of handle. In most cases you’ll need a small Allen key to release this recessed screw. An Allen wrench set will come in handy to remove these hex head screws. Once released you can gently pull and the handle will come off.

Remove any visible screws that hold the face plate in place. Can’t see any obvious, exposed screws? Many levered door handles have hidden screws. You should see a small notch on the side of the cover plate. Use a flat head screwdriver to pop the cover off.

Once you’ve removed the handle and cover plate, you’ll be able to remove the remaining mounting screws holding the door handle into the door frame. A little tip, If you do have trouble getting the spindle free from the latch mechanism, try to push the latch then it should come loose. That’s all it takes!

There are a few tricks that you can use to remove a stripped screw from a door knob. First, try using a pair of needle-nose pliers to grip the head of the screw and twist it counter clockwise. If that doesn’t work, try using a hammer to gently tap on the head of the screw. This may help to loosen the screw so that you can remove it. After doing this you’ll need to drill a new hole for a new door knob as this hole will be damaged. With a little patience, you should be able to remove even the most stubborn stripped screw.

If you’ve been pressing and wiggling the door knob, or you’ve tried a small screwdriver and the knob still won’t come off. You might have to resort to some drastic measures. It’s really impossible to remove the entire lock assembly without first taking the knob off. If you really can’t get it off, you can saw off the know. Obviously this will completely destroy the door know, so only do this if it’s broken and you’re planning to replace it anyway.

As with above, sometimes these buttons and catches don’t release as they should. It’s possible the cover plate or mounting plate is damaged somehow and that’s why it won’t release. Use a pair of pliers to twist and pry the cover plate off. You might need a bit of force if it’s really stuck and it’s likely you’ll cause damage, so again, only do this if you intent to replace the door knob entirely.

Latch won’t retract or is jammed

If you’re having trouble removing a door knob, it could be because the latch is not retracting. This can make it difficult to remove the knob, since you won’t be able to pull it off the door. There are a few things you can try to fix this problem. If you press the spring loaded part of the latch, sometimes this will allow everything to release. If that doesn’t work you can then put a little more force on it with a screwdriver.

Not having the right tools for the job

This is quite a basic starting point. make sure you have the right tools for the job. Depending on the type of door knob you have you could a range of tools. Check what type of screw head you’re dealing with. You may need a flat head screwdriver or a Phillips screwdriver. It is also helpful to have an Allen wrench set as a hex head Allen key may be required. With these tools you should be able to remove all types of door handles and door knobs without too much trouble.